Simple whole30 spaghetti squash with chicken and BBQ sauce finished with a drizzle of creamy dairy free sauce. The spaghetti squash boats are baked in the oven until tender then stuffed with shredded chicken breast and tossed together in a vibrant BBQ sauce – a delicious lunch or dinner made with only whole foods!

Spaghetti squash resembles spaghetti strands when cooked, and for this reason is known as vegetable spaghetti or noodle squash and is perfect substitute for pasta if you need less carbs or less processed foods in your diet. Therefore this spaghetti squash recipe is gluten free, dairy free, paleo and whole30 friendly.

The BBQ sauce that accompanies the chicken and the spaghetti squash boats is also made from scratch and it’s whole30 approved. The dairy free ranch sauce is complementing the dish beautifully, but it’s totally optional if you don’t have any on hand.

Spaghetti squash has a mild taste similar to pasta and is often used as a healthful substitute for pasta due to its low carbohydrate levels and greatly appreciated for people who cannot eat gluten.

It is rich in the B vitamins riboflavin, niacin, thiamin, folate (ideal food for pregnant women) and fatty acids like omega-3 and omega-6 which prevent inflammation. It’s also packed with minerals like potassium, manganese, calcium, iron, phosphorus, and zinc.

The benefits of this spaghetti squash dish is that it contains a good amount of fiber, which is essential for a healthy digestion and can help keep you feeling full longer. You can also customize the recipe and pair the spaghetti squash boats with a large variety of sauces, meats, seafood, some dairy free cheese or combined with other vegetables.

Now, this spaghetti squash recipe with BBQ chicken is really easy and simple, just cut your spaghetti squash in half, bake the squash and chicken breasts at the same time but in separate trays. And meanwhile prepare the BBQ sauce with the rest of veggies, mix with shredded chicken breast, put everything back into shells and serve with a drizzle of dairy free ranch sauce!

Find the complete printable recipe with measurements below.

If you get a fresh spaghetti squash, it can last several month in a cool, dry place. Keep the squash between 55° to 60° Fahrenheit (13°-16° C) and out of direct sunlight or heat. Once cut it may last up to a week in the fridge.

The Sauce For Spaghetti Squash

If you’re following a strict whole30 diet, make your own BBQ sauce from scratch or if you don’t have time make sure you use a good quality store-bought whole30 approved BBQ sauce like this one.

Another option is to use a simple tomato sauce. A lot of tomato sauces on the market are filled with artificial flavors and sugar in order to taste better. So it’s better to make the sauce from scratch if you have time or use a good quality jarred sauce. My favorite is Cucina Antica. It’s made with natural ingredients, no preservatives, no added sugar or water. Just real Italian tomatoes.

To get less soggy spaghetti strands, you need to reduce the moisture in the squash. You need those edges caramelized for the best flavor.

Therefore once you cut it half, bake it cut-side down 75% of the baking time so that the moisture pools on the pan instead of collecting inside the spaghetti squash. Then bake it cut-side up at a much higher temperature for a nice golden edge. Also don’t overbake, it should be still a little firm.

Once baked let it cool a bit, so the starch could hold it’s texture better then use a fork to scrape roasted spaghetti squash flesh into strings.

How To Make This Spaghetti Squash Boats Recipe

1. Cut the spaghetti squash in half lengthwise. Scoop out the seeds with a spoon. Brush the insides with oil, and season with salt. Get a rimmed baking sheet and place the squash cut-side down.

2. Bake the spaghetti squash in a preheated oven at 380F for 35 minutes then flip the halves so that the cut-side is facing up. Bake for additional 20 minutes at a higher temperature (410F) to get nice caramelized edges. Optional: Switch the oven to broil on for 2-3 minutes to brown and crisp up the edges. Allow to cool for about 15 minutes before handling.

3. Bake the chicken breasts as the same time as the spaghetti squash (in a separate dish). Just season with salt and pepper and you’ll need to bake them approximately 25-30 minutes. Shred the chicken once cooked.

4. Meanwhile in a skillet sauté the onion with chopped bell pepper in 1 tablespoon of oil  until tender.

5. Add the prepared BBQ sauce and the shredded chicken to the skillet and mix to combine.

6. Scrape the spaghetti squash along the edges to create strands and remove them on a dish.

7. Fill the squash boats in layers: one layer of squash noodles and then BBQ sauce mixture with chicken until you fill all up. Finish with a drizzle of ranch sauce and freshly chopped herbs (parlsley or cilantro).

To Make Ahead. The squash can be bakes and “shredded” up to 1-2 days in advance. Prepare the chicken and the BBQ sauce in advance and assemble when ready to eat. Heat in the oven before serving if necessary.

Video: How To Make Spaghetti Squash With BBQ Chicken 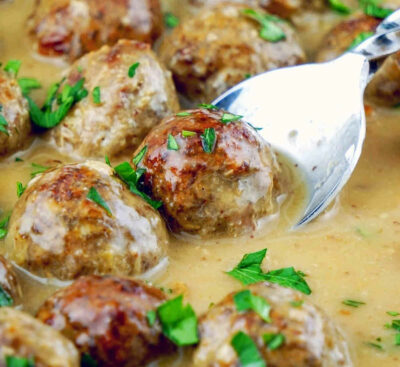 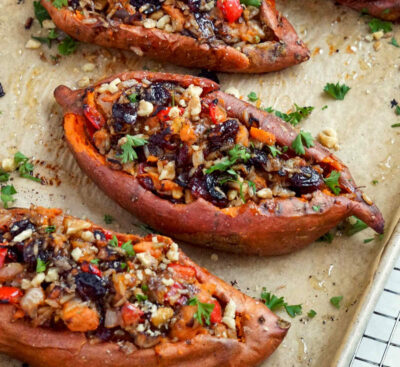 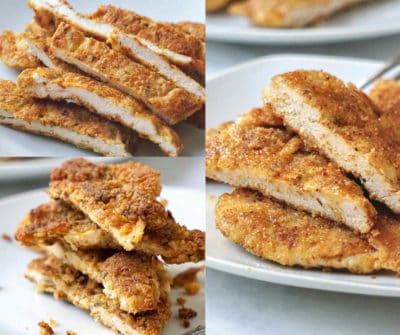 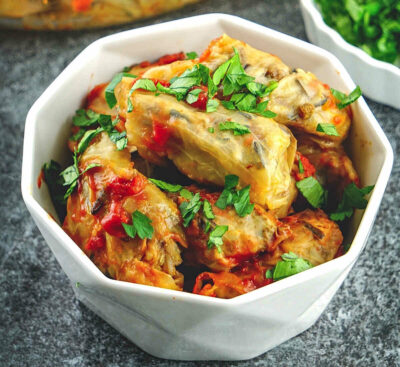 Did you love this butternut squash recipe? Be sure to leave a comment and a rating below it’s really helpful for me and readers! 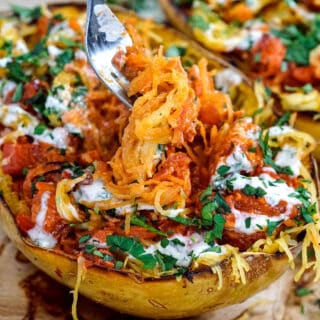 If you can’t see the video, make sure you disable your ad-blocker first. Or watch the video on my YouTube channel.
Tried this recipe?Mention @HealthyTasteOfLife or tag #healthytasteoflife!

©HealthyTasteOfLife. Content and photographs are copyright protected and need prior permission to use. Copying and/or pasting full recipes to other websites and any social media is strictly prohibited. Sharing and using the link of this recipe is both encouraged and appreciated! 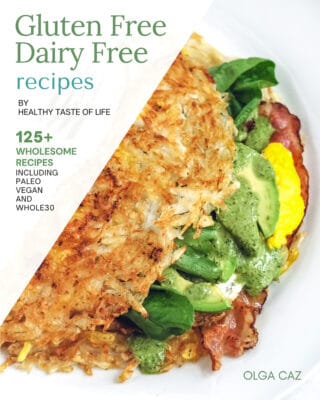 Our family loved this recipe, thanks for the bbq sauce as well, my kids react badly to the store bought version!

My pleasure! I'm glad you enjoyed it!